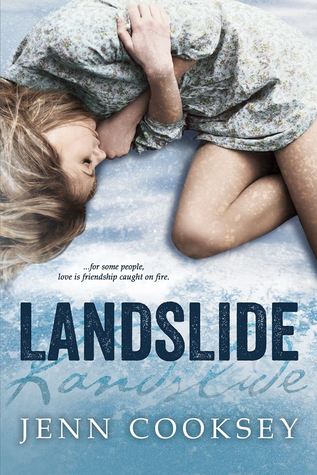 Title: Landslide
Author: Jenn Cooksey
Series: No
Source: Received from the author in exchange for an honest review

For Erica and Cole, the bond of friendship was forged in childhood.

Now, torn and broken by grief, that bond will become paramount as two friends look to one another for comfort, strength, and hope in the aftermath of loss. On a journey taken both together and alone, Erica and Cole search for healing and life born anew. Although when mistakes, secrets and betrayal are revealed, the two must each learn to accept that even saints and some angels are human and people aren’t always who they appear to be.

But in the age old struggle to forget and forgive, realization dawns. And with it, so does the understanding that sometimes, the sturdiest foundation for the future lies buried in the dust of the past. Because, for some people…

…love is friendship caught on fire.

This review is also posted on my new blog, Two Moms Reading.

Ever since Jac recommended Jenn Cooksey’s Shark Bait to me back in 2012, I have been a huge fan! Her Grab Your Pole (GYP) series is one of my favorites, and it is so realistic, hilarious, and heartwarming all at the same time. I have been anxiously awaiting more from Jenn since I finished Shark Out of Water back in July 2013, so when I heard that she was releasing a new, non-GYP book, I was super excited, but also a little bit nervous. Like I said, I have come to consider Jenn as a favorite, go-to author based solely on her GYP series, so what if I didn’t like it? Aside from loving Jenn as a person (seriously, I have conversations with her), I would have been devastated to not like Landslide. My nerves were very quickly  eased when I was completely hooked within the first two chapters!

If it’s one thing that I would have to say that Jenn excels at, it would have to be writing her characters. She has written some of the best characters I’ve ever read. None of them ever feels flat or underdeveloped, and they’re so real that I sometimes forget that they’re not! And Landslide is no different. Right from the start, I was completely drawn to Cole and Erica. Their friendship was so fun, and as their romantic feelings grew, they just got better. Also, Cole’s use of pet names, specifically “sweetheart”, kind of reminded me of Haymitch from The Hunger Games, which was always good for a smile.

I pretty much loved everything about Landslide. That’s not to say I didn’t occasionally get frustrated and want to smack someone for being stupid. That’s pretty much par for the course with any romance. But those were very minor. There were so many surprises! Every time I thought I had the book figured out, I’d quickly find out that I was wrong, and so I could not put it down!

There’s not really much more I can say about Landslide without spoiling everything (which would suck for you and get me in trouble with Jenn!), but I absolutely loved it, possibly even more than GYP. It’s one of the best books I’ve ever read, and you need to read it NOW! Honestly, I would give it more than 5 stars if I could!

Hey everyone. As you probably know, I have been seriously neglecting this blog. I gave it a lot of thought, and I’ve picked up a lot of things in the last few months that have really cut into my reading time and blogging time. I didn’t want to completely give up blogging, but I knew I couldn’t handle it on my own. So, I talked to my friend, Jacque, and we decided to create a blog together, so I am inviting you to follow me over there! Our welcome post is live, and our first post, my Stacking the Shelves, will be up tomorrow! http://twomomsreading.com/welcome

Thank you for sticking with me, and I hope to see you over at the new blog!

This blog will still be up so you can access my old reviews, but I probably won’t be posting to it much, if at all.

Panic began as so many things do in Carp, a dead-end town of 12,000 people in the middle of nowhere: because it was summer, and there was nothing else to do.Heather never thought she would compete in Panic, a legendary game played by graduating seniors, where the stakes are high and the payoff is even higher. She’d never thought of herself as fearless, the kind of person who would fight to stand out. But when she finds something, and someone, to fight for, she will discover that she is braver than she ever thought.Dodge has never been afraid of Panic. His secret will fuel him, and get him all the way through the game, he’s sure of it. But what he doesn’t know is that he’s not the only one with a secret. Everyone has something to play for.For Heather and Dodge, the game will bring new alliances, unexpected revelations, and the possibility of first love for each of them—and the knowledge that sometimes the very things we fear are those we need the most.

This book was received as part of an ARC tour from On the Same Page ARC tours.

I had heard some mixed reviews on Panic, but since I liked Before I Fall and the premise sounded interesting, I decided to give it a chance. At the time that I’m writing this, it’s been about 2 weeks since I finished Panic, and I don’t remember too much about how I felt about it, so it obviously wasn’t wonderful or terrible.

I think I vaguely liked it, though it wasn’t exactly what I expected. I guess I thought, since it’s titled Panic, that it would be more about the game with some contemporary aspects, rather than a more contemporary novel with the game added in.

I had a little bit of a hard time getting into Panic because of the narrators. I liked Heather, but I didn’t really connect with Dodge. I just didn’t find him to be a relatable character, which made it hard to read his sections.

Overall, I guess I just don’t have too much to say about Panic. It was a decent story, but it definitely didn’t reel me in like Before I Fall did.

Set before the events of Courtney C. Stevens’s debut novel, Faking Normal, this digital short story focuses on Bodee Lennox, otherwise known as the Kool-Aid Kid.Bodee Lennox has secrets. About where he got the four-inch scar on his leg. About the bruises on his back. About what it’s really like to live in the Lennox household. These are things he doesn’t share with anyone . . . until he meets Gerry, a girl with bright-green hair and a smile the size of Alaska. When Gerry falls out of a bus in Rickman, Tennessee, and lands at Bodee’s feet, she gives Bodee two things he desperately needs: a friend and a chance to leave Rickman behind, even if it’s just for a few hours.He joins Gerry on her epic bus trip for as far as his money will take him. And by the end of the day, more of Bodee has changed than just the color of his hair.

It’s really hard to say much about The Blue-Haired Boy because it was so short, but I definitely enjoyed it. I knew I had to read it because I just loved Bodee so much in Faking Normal, so I wanted to know more about him. It was definitely interesting to see a little sneak peek into his personality before he became friendly with Alexi. Also, it was kind of amusing to see why/how he became the Kool-Aid Kid.

However, this glimpse into Bodee’s past was a little heartbreaking. It was hard to see him struggling with his home life with no friends. But his short-term friendship with Gerry was great. He definitely needed something to let loose.

While The Blue-Haired Boy takes place before Faking Normal, I would definitely recommend reading it after Faking Normal, especially if you love Bodee and want to see a little more of him.

I follow Goodreads rating scale for ease of posting my reviews in both places, with one addition: